The world will end on September 23rd!! Oops!! 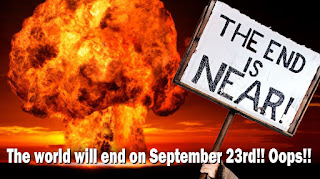 “Bible prophesy helps us to better understand the future and realize the urgent need to spread the Gospel. It motivates us to personal purity and gives us hope in a hopeless age.” Tim LaHaye

Did you miss it? Just in case you missed it and maybe it’s good that you did, “Christian” numerologist, David Meade, predicted the end of the world yesterday, (September 23rd) when so-called “Planet X” was to collide with Earth. According to Meade, who apparently eats too many mushrooms, the recent solar eclipse and hurricanes are warning signs of a nearing apocalypse and cites various passages from Scripture to support his delusion. Please understand, anyone can quote Scripture out of context. If you quote the Bible out of context, you can make it say nearly anything. A case can be made for nudism if you quote the Bible out of context.
Mr. Meade doesn’t know his Bible. Jesus said very clearly, “But concerning that day or that hour, no one knows, not even the angels in heaven, nor the Son, but only the Father” (Mark 13:32). In spite of that, every few years some “nut” calling themselves a Christian says that the world is coming to an end. Unfortunately, media types always find them and have a good laugh at the expense of biblical Christianity.
Personally, I was thankful for Jonathan Sarfati’s response. He points out that claims of “planetary coincidence” have already happened on four occasions during the last millennium alone and the world did not end. “As usual with any astrology (or Christian adaptations of it), one cherry-picks the stars that fit the desired conclusion. There is nothing to suggest that 23 September is a momentous date for biblical prophecy, and Christians need to be careful about being drawn into such sensationalist claims.”
All of the major approaches to biblical prophecy agree on this truth: Jesus will return bodily and when He comes, He will come in great power and glory to reign. At His trial Jesus told the Sanhedrin (Matt. 26:64), “But I tell you, from now on you will see the Son of Man seated at the right hand of Power and coming on the clouds of heaven.” Jesus is alluding to Daniel 7:14, which predicts that the Messiah’s kingdom will be everlasting.
The angel told the disciples as they watched Jesus ascend into heaven after His resurrection, “This Jesus, who was taken up from you into heaven, will come in the same way as you saw him go into heaven” (Acts 1:11). Jesus ascended bodily; He will return bodily. However Christians understand the details of prophecy, all agree that Jesus is coming back bodily to reign.
Many Christians, myself included, believe that all Christians will one day be removed through the Rapture, followed by seven years that complete Daniel’s 70th “week” for Israel. During this time many Jews will be saved and many will be martyred by those loyal to the Antichrist, who comes to power and rules a cruel one-world government. At the end of the tribulation, just as the forces of the Antichrist are ready to annihilate Israel, Christ will return, destroy His enemies, and establish a millennial reign in Jerusalem. During this time, Satan will be bound and Christ will rule the world. Many will be saved during that time. Sadly, some will reject Him even in the midst of “Paradise.” At the end of this time Satan will be released and lead a final rebellion. Fire will come down from heaven, destroying all those who rebelled against God. Satan will be thrown into the lake of fire. The dead will be raised for judgment and sentenced to the lake of fire, which is the second death (Rev. 20:1-15).
One’s particular position on prophecy is not a question of their orthodoxy. For the past 2,000 years believers have debated when Jesus is returning. Those who know their Bibles know that we don’t know. No matter what view you take, the Lord Jesus clearly is going to return bodily. At that time, He will judge those who have rejected Him. That, along with the uncertainty of life, is incentive to believe in Christ now without delay.
In light of Christ’s return, we must be faithful (1 Cor. 15:58), “Be steadfast, immovable, always abounding in the work of the Lord, knowing that your toil is not in vain in the Lord.” Wonderfully, we can have assurance and comfort in the midst of the unraveling of our contemporary world. Someday all evil will end. God is sovereign and works all things after the counsel of His will (Eph. 1:11). He sets up rulers and takes them down to accomplish His plans (Prov. 21:1). No evil ruler, including the Antichrist himself, can thwart God’s plan.
And as 1 John 3:3 reminds us, “Everyone who has this hope fixed on Him purifies himself, just as He is pure.” We need to be ready. Each of us needs to make sure that we’re living holy lives in light of Jesus’ warnings to be ready when He comes (Mark 13:33-37).
While on a South Pole expedition, British explorer Sir Ernest Shackleton left a few men on Elephant Island, promising that he’d return. Later, when he tried to go back, huge icebergs blocked the way. But suddenly, as if by a miracle, an avenue opened in the ice and Shackleton was able to get through. His men, ready and waiting, quickly scrambled aboard. No sooner had the ship cleared the island than the ice crashed together behind them. Contemplating their narrow escape, the explorer said to his men, “It was fortunate you were all packed and ready to go!” They replied, “We never gave up hope. Whenever the sea was clear of ice, we rolled up our sleeping bags and reminded each other, ‘The boss may come today.’”
Just as it was prophesied and the Lord Jesus came the first time, He’s coming back. Are you ready?

Can we help you spiritually? Can we help you know Jesus better? Please check out more resources on our church's web page, Gracechurchwi.org. Or, call us at 262.763.3021. If you'd like to know more about how Jesus can change your life, I'd love to mail you a copy of how Jesus changed my life in "My Story." E-mail me at Carson@gracechurchwi.org to request a free copy. Please include your mailing address. "
Posted by Scott Carson at 4:38 PM