Suicide: A tragic reality we need to talk about 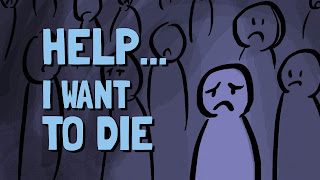 “My experience with depressed people is that when they have suffered from long periods of depression and begin to talk about suicide, we had better pay attention.”  Curtis Thomas

Recently, I was talking with a friend who shared the heartbreaking news that a relative had committed suicide. Our world is one of death and pain, yet I don’t think that there is any greater heartbreak than to have a loved one or friend take their own life. There are so many unanswered questions, accompanied by a raging sea of emotions.
If you’re like me, you feel like you took a hit in the gut when you learn of a celebrity or someone famous who took their own life. That’s compounded many times over if it’s someone that you love and care about.
Suicide in the U.S. has surged to the highest levels in nearly 30 years with increases in every age group except older adults. The rise is particularly steep for women. It’s also substantial among middle-aged Americans, a group whose suicide rates had been stable or falling since the 1950s.
The overall suicide rate has risen some 25% since 1999. In 1999, nearly 30,000 people died from suicide but by 2014 that number rose to over 42, 000. Nearly half a million people each year are seen in the ER for self-injury. Suicide is the 3rd leading cause of death for teenagers. It’s estimated that more than a million people die by suicide each year in the world, or more than 2,700 people per day. 7% of 18-39 year olds admit that they’ve seriously considered suicide during the last year. Depression is a major factor in two thirds of all suicides. Other major factors are childhood abuse, sexual molestation and confusion over sexuality.
Suicide is not new but has become more widespread. Even in the Bible we find at least seven accounts of suicides, including King Saul, Samson, Ahithophel and Judas. Nearly everyone has wearied of life at some point or another. Most of us have had suicidal thoughts. There are godly believers in Scripture who wanted to die, like Elijah and Job. The Bible’s description of their despair and suicidal desires make it clear that they were wrong. Bailing out on life is always a wrong choice. Sometimes God brings us to a point of total desperation (Psalms 107), so we’ll give up trying to live life in our own strength and cast ourselves wholly upon Christ.
If a Christian commits suicide, will they go to heaven? Apart from rejecting God's provision for salvation through the sacrificial death of Jesus, suicide is the worst thing an unbeliever can do. That’s because there is no second chance for salvation after one’s death. But for the Christian, it’s essential to understand several things regarding suicide.
First, suicide is sin. God forbids murder (Exodus 20:13). Taking one's own life is murder. It rejects the sufficiency of God’s grace to face any difficulty. Suicide is also a sin because it causes terrible suffering and pain for those we leave behind. Yet, while suicide is a sin, it is not an unpardonable sin. The same God who forgave us all of our sin because of Christ’s sacrifice, knew that we were going to take our own life. When Jesus died for our sins, all of them were future. Once we accept Christ as our Savior, we are part of God’s forever family. If your Dad and Mom will always be your Dad and Mom, that’s even more true based on Scripture and with a Heavenly Father who loves us unconditionally. You can’t sin enough, even by committing suicide, to get God to reject or disown you.
What if someone struggles with suicidal thoughts? First, go see your doctor. Investigate on whether there might be a physiological reason you’re having these thoughts. If they’re persistent, see a good biblical counselor. Find one who’s been recommended by someone that you trust.
Then, find a mature Christian friend to confide in. When you feel at low points, call them or meet with them. Have them pray with you and for you.
Make certain that you’re getting adequate rest. The Prophet Elijah’s time of extreme despair came after a time of exhausting ministry. His spiritual and emotional resources were at a very low point.
Spend time in the Word and in prayer. God knows what you’re going through. He loves you and completely understands. Perhaps read the Psalms. King David went through some very low points in his life.
Though you want to isolate yourself, it’s the worst thing you can do. Faithfully attend worship services. Commit to being part of a small group. Seek out Christians that care about you, live in victory and tend to be spiritually optimistic.
Exercise, limit your consumption of the media, and make yourself go outside into God’s wonderful creation. Most of what’s in the news is negative and depressing. It’s not what you need. Exercise has been proven to increase our energy and even help change our moods.
Find someone that you can help and be a blessing to. Visit a shut-in or someone elderly with limited mobility. Serving and investing in others is phenomenal therapy. Write thank you notes to those who have been a blessing to you.
There have been periods of my life when I have felt like I was drowning in what John Bunyan called “the Slough of Despond.” Something God has used in my heart over and over again are believers who faced horrible persecution like David, Joseph, the Apostle Paul and heroes from Christian History like Michael Sadler, Adoniram Judson or Dietrich Bonhoeffer. Knowing their story and seeing God’s faithfulness in their lives has encouraged me. Because the same God who loved them and got them through much worse than I am facing, loves me and will get me through as well. His grace truly is sufficient!
You and I are surrounded by hurting, often despairing people. Let’s ask God to make us that person that they can call for help and encouragement! Let’s commit to being their “suicide prevention hotline.”

Can we help you spiritually? Can we help you know Jesus better? Please check out more resources on our church's web page, Gracechurchwi.org. Or, call us at 262.763.3021. If you'd like to know more about how Jesus can change your life, I'd love to mail you a copy of how Jesus changed my life in "My Story." E-mail me at Carson@gracechurchwi.org to request a free copy. Please include your mailing address. "
Posted by Scott Carson at 1:22 PM