Russian Hacking??? What about Russian Persecution and Nigerian Genocide? 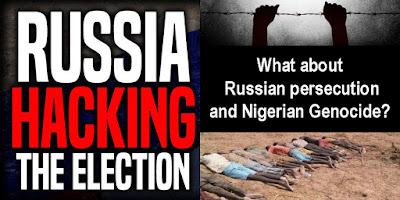 “The worst persecutions are not the tortures and beatings of Christians, but not giving any opportunity to non-Christians to eternal life.”
Nik Ripken

Does anyone believe that Russia is the only one who meddles with our elections? Would we be surprised to learn that China or other countries seek to influence them? Personally, I find the media ranting to be a bit disingenuous. It’s a well-known fact our own government meddles with elections in other countries. Just one example, in 1996, we worked to make certain that Boris Yeltsin won the upcoming Russian election, even though polls showed Russians favoring hardline Communist, Gennadi Zyuganov. Yeltsin’s popularity was in the single digits. That didn’t stop President Bill Clinton, Britain’s John Major and German Chancellor Helmut Kohl from determining that their man win Russia’s first “free and fair” election in the post-Soviet era. As The New York Times reports (02-17-18), we’ve meddled with other nation’s elections since the birth of the C.I.A. in 1947. Personally, I find this latest revelation barely newsworthy and it’s certainly not worthy of all of the hype it’s been given since the 2016 election.
A greater concern for the Church isn’t government meddling, but Kingdom persecution. The Russian government continues to be an enemy of the gospel. There’s been increased persecution of Christians since Russia’s Anti-Proselytizing Law went into effect two years ago. Vladimir Putin signed a law outlawing evangelism and cracked down on house churches. This new law forbids evangelism outside of churches and other religious sites. It even includes singing Christmas carols in public.
Yet, Russian believers bravely disobey the anti-proselytizing law. During the recent World Cup, 400 churches partnered together for an evangelism outreach, sponsoring screening parties and handing out more than 500,000 tracts, World Cup editions of the Gospel of John, and New Testaments.
Recently, two Christian radio stations lost their licenses to broadcast after 25 years of religious freedom in Russia and both are silent. They now deliver radio programs all across Russia via cellphone, streaming services, and social media apps. God is sovereign over human government and they have more listeners than they did before the radio stations were shut down.
While our brothers and sisters in Russia are being persecuted, what’s taking place in Nigeria is genocide. Nigeria is one of the most dangerous places in the world to be a Christian. Two years ago, the Obama administration called what ISIS was doing to Iraqi Christians “genocide” yet sadly, little is said about the extermination of Christians in Nigeria.
The population of Nigeria is almost evenly divided between Muslims and Christians. Not surprisingly, what makes Nigeria so dangerous for Christians originates in the Islamic north. Christians have been on the receiving end of a campaign that’s “religious cleansing,” in a diabolical attempt to eradicate Christianity from the region. Islamic terrorist group, Boko Haram, is responsible for killing thousands of Christians and displacing countless more in northern Nigeria. Yet, Boko Haram isn’t the only group targeting our brothers and sisters there. Over 6,000, mostly children, women and the elderly have been maimed or killed in night raids by armed Fulani herdsmen. Nigerian Christians report the continuous abduction of underaged Christian girls by Muslims who are forcefully converted to Islam and ordered into Muslim marriages.
Whatever one’s view of immigration, there’s no rationale for the Trump Administrations tragic limiting of the escape of persecuted Christians from hostile countries. 14,000 fewer Christian refugees will arrive in the U.S. this year. This Administration’s policies have led to the fewest resettlements of persecuted believers in a decade. This is in spite of promises by Vice President Mike Pence, that Christians wouldn’t be sacrificed around the globe with the U.S. doing nothing. So, far it’s not been much more than words while brothers and sisters suffer persecution.
Thankfully our government has sought to intervene on behalf of American Pastor Andrew Brunson. For over two years Pastor Brunson has been imprisoned in Turkey over false charges of ties to terrorist organizations. He’s been detained since a 2016 coup attempt against Turkish President, Recep Tayyip Erdoğan and has been a pawn in the hands of that demagogue. Pastor Brunson and his wife, Norine, helped run the Izmir Resurrection Church in Izmir and did other missionary work. It’s unbelievable that an American citizen is being held as a political hostage, but not in Syria or Iran, but Turkey, one of our NATO allies. Pray for his soon release.
So, what does this all mean for us as believers? Our first concern must never be politics. These are Kingdom issues. This is about our Family, our eternal Family.
What can we do about all this? First, we must pray for our brothers and sisters in Russia, Nigeria, the Brunsons and other parts of the world. Second, say something! While our elected officials often seem tone deaf to the cries of persecuted Christians worldwide, they’re very attentive to the voices of voters. Call Congressman Ryan. Call your U.S. Senators. Call the White House. Write a handwritten letter because that often carries much more weight than an e-mail. Keep it simple. Just say, “Please do something about the Genocide of Christians in Nigeria and the Brunsons.”
If the Church doesn’t speak out for its own, who will? The Church that lives in religious freedom must cry out for those who are oppressed and can’t speak for themselves. How can we be silent when the blood of our brothers and sisters cries out to God for His intervention? (Rev. 6:10).