The Joy of Parenting a Teen! 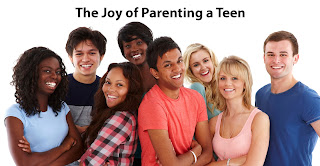 “Myths which are believed in tend to become true.”
George Orwell

It’s not surprising that non-Christians believe this myth. After all, the Bible isn’t the foundation for their worldview. Yet, it’s surprising and saddening that, at least by listening to what’s said, most Christians are contaminated by Ad Populum. What’s Ad Populum? It’s a logical fallacy that attempts to prove an argument as correct simply because many people believe it to be so. It’s that McDonald’s sign which says, “Billions and billions served.” The underlying assumption is that if so many people eat McDonald’s, McDonald’s must be really good. Another would be that since over 60% of Americans believe in aliens, obviously there are aliens.
An Ad Populum that’s made its way into the Church is that raising teens is very hard and teenagers are very difficult. It’s simply not true. Some are and some aren’t. The thinking that bad teen years is inescapable is a myth and those who believe it are ignorant of Scripture.
Some of the greatest heroes and heroines in Scripture were teens: David (1 Samuel 17); Joseph (Genesis 37); An unnamed slave girl (2 Kings 5); Daniel and his friends (Daniel 1); Mary the Mother of Jesus (Luke 1).
Paul wrote to Timothy, “Let no man despise thy youth; but be thou an example of the believers, in word, in conversation, in charity, in spirit, in faith, in purity” (1 Timothy 4:12). While it’s true that raising teens can be challenging, yet aren’t most things that are worthwhile challenging if they are going to be rewarding? Some of my most fulfilling friendships today began when an individual was a teen. Yet, to be successful you must have the right tools. What do you need to parent a teen?
A soft tongue. Teens are transitioning from childhood to adulthood. In spite of the bravado, they’re very insecure. Other teens can be very cruel. So, they need affirmation and lots of it. Praise though what you want to encourage. A godless world is enamored with ability and appearance. Our loving heavenly Father rewards character. Praise what God loves!
Teens also need soft answers when they spout sharp words, “A soft answer turns away wrath, but a harsh word stirs up anger” (Prov. 15:1).
A thick skin. Because they lack maturity, wisdom and discernment – a teen often says the first thing that pops in their head. That’s not a sign of wisdom. Proverbs 19:11 reminds us that “Sensible people control their temper; they earn respect by overlooking wrongs” (NLT). Can you imagine driving through Chicago traffic and every time someone changed lanes without turning on their signal, you laid on your horn? (Hopefully, none of you do that). Have you ever had a boss who nit-picked your every misstep? Remember how frustrating it was? So, choose your battles.
While in your face disrespect shouldn’t be tolerated, and not only because it’s a sin, it’s a pattern that will hurt a future with an employer. This is where parents, particularly a godly Dad, can make a difference. I once told one of our then teen children, “Do not talk to my wife like that.”
A strong backbone. Anything worthwhile takes effort and the endurance of pain. Every Olympic Gold Medalist has learned to live with the pain. The way to endure with the sometimes painfulness of raising a teen is to keep the finish line in view. You’re raising the future parent of your grandchildren, someone’s spouse and employee.
For example, if you wise off to the boss or don’t do your job, you’re terminated. You don’t get a paycheck for showing up. So, why should a parent supply a cell phone, new clothes, even wash them, give a ride or money to someone who mistreats them? Sadly, we’ve all seen the outcome of teens who weren’t “forced” to go to church or youth activities. They’re not allowed to skip school, so they get the message on which is more important. Which one though can make a difference in life and eternity?
A kind heart. Teens are often corrected for their attitudes. Yet, many parents have simmering bitterness toward a teen that’s made life difficult. They may find themselves comparing their children with their other children or with other people’s children who seem better behaved.
Sometimes the comparing is used as a weapon in an attempt to motivate a teen to alter the behavior (it doesn’t work). Besides, the reason Ralph isn’t more like Matilda is because God didn’t make Ralph that way.
Yet, how often is our own attitude sinful? We can be arrogant, angry, and apathetic (that’s just the “A’s). But our Heavenly Father is continually kind to us. I’m so thankful that He doesn’t give us what we deserve. Yes, He corrects us because He loves us (Hebrews 12:5-7). He’s not upset at us when we sin because we make His life difficult, make Him look bad or inconvenience Him. No, God knows how deadly sin is to us.
Calloused knees. The One who can change our teen’s heart is the One who gave them life. One of the blessings of being a parent is that God uses those parenting years to grow your prayer life and dependence on Him.
One of the first prayers that we must pray is not to change them – it’s, “Lord, please change me. What do you want me to learn from this?” God uses the heat of relationships to grow and sanctify us. If you have a heavy heart or feel anger bubbling inside, share it with the One who truly understands and loves both you and your teen. Scripture promises, “He heals the brokenhearted and binds up their wounds” (Psalm 147:3).
Things may not turn out well for your teen. Each one has an independent will. The most important question isn’t, “What about my teen?” but “Who does God want me to be? How can I glorify Him in my parenting?”


Can we help you spiritually? Can we help you know Jesus better? Please check out more resources on our church's web page, Gracechurchwi.org. Or, call us at 262.763.3021. If you'd like to know more about how Jesus can change your life, I'd love to mail you a copy of how Jesus changed my life in "My Story." E-mail me at Carson@gracechurchwi.org to request a free copy. Please include your mailing address.
Posted by Scott Carson at 9:25 AM