Pray for the Persecuted Church! 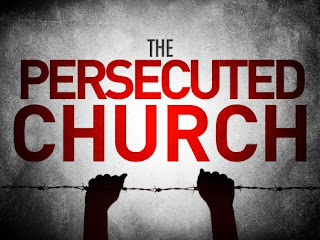 “If I’m following Christ, why am I such a good insurance risk?”
Ernie Campbell

According to a disturbing new report, police in China arrested a woman, Xu Shizhen, along with her daughter and 3-year-old grandson, for singing Christian songs in a public park. Recently, China passed even more restrictions of practicing faith that make it illegal to publicly minister if you’re not inside of a church that’s been registered with the government. Christianity Today reports that, according to Chinese advocates inside the country, since the arrest, the three have not been seen.
“The new religion regulations are sweeping in scope and, if fully enforced, could mean major changes for China’s unregistered church, not only in its worship and meeting practices, but also engagement in areas such as Christian education, media, and interaction with the global church,” wrote ChinaSource president Brent Fulton. “Yet the nature of these activities and, indeed, of much religious practice throughout China, makes enforcement extremely problematic.”
It appears enforcement, at least in Xu’s Xianan district of Xianning, is going to be very strict. The regulations which include prohibitions against publishing religious materials without approval, accepting donations without approval, or renting space to an unregistered church, don’t even officially go into effect until February 2018. Other provinces have been coming down especially hard on religious education for children. In Zhejiang province—where hundreds of crosses were ripped off of churches over the past several years—elementary and middle school children weren’t allowed to attend church or Sunday school this past summer. In Wenzhou, a coastal city in Zhejiang province nicknamed “China’s Jerusalem,” officials warned more than 100 churches to keep their teenagers home from summer camps or Sunday schools. North of Zhejiang, officials in Henan province also forbid church summer camps, claiming the “hot summer temperatures would be unhealthy for youth.”
China’s young Christians drew international attention over the summer when two were killed by ISIS in Pakistan. Meng Li Si, 26, and Li Xinheng, 24. These two Chinese martyrs were teaching in a private school in Quetta when they were kidnapped and murdered. Their deaths prompted scrutiny from both China and Pakistan. Meng and Li were in Pakistan on business visas, two among thousands of Chinese sent West to help build infrastructure and trade routes as part of China’s “One Belt, One Road” trade push. Chinese believers are using their careers in China’s trade initiatives to send out thousands of lay missionaries to spread the Gospel. Only God could use an atheistic government to unknowingly finance bi-vocational missionaries to share the Gospel in anti-Christian Islamic ones. With the boldness of the early church, believers living under the iron heel of Communism are being imprisoned in their own country or martyred in another for their faith. Not only are Chinese believers sharing their faith in China – risking their lives, children, and property but they’re fanning out over the fields of the world to share the message of God’s grace. And because there are so many of them, and they must be covert, there are no accurate numbers of how many, but there are lots of them.
At Grace today we are participating in the Annual International Day of Prayer for the Persecuted Church. It’s tempting to act as if Christianity is American and wrap our faith in the Stars and Stripes. We too easily forget that we have more in common with Christians in China (and around the world) than we do with our unregenerate neighbors who live across the street. They worship the same God, have the same worldview, live life with the same blueprint (the Bible), and hold to the exclusivity of Jesus Christ as the only means of salvation and restoration of a relationship with a loving, holy God. They have the same final destination in that we will spend eternity with them worshiping the One who died so that we might live.
My heart is often broken as I learn of the suffering of brothers and sisters around the world for the sake of the Gospel. Lately, I’ve been mulling over: When did we start to think that Christianity is supposed to be safe?”
Christianity has never been safe. Jesus warned us in John 15:20, “If they persecuted Me, they will also persecute you.” We truly know so little of persecution in Western Civilization. Having a “friend” not invite you to the annual Super Bowl Party or making fun of you behind your back, or even losing your job for your faith – is hardly persecution.
According to Open Doors USA, a Christian advocacy group focused on ministering to persecuted Christians, 1 in 12 Christians today experiences high, very high or extreme persecution for their faith. Nearly 215 million Christians face high persecution with 100 million of those living in Asia. It’s estimated that between the years 2005 and 2015, 900,000 Christians were martyred. That’s an average of 90,000 Christians each year.
How dare we play it safe? How can we rationalize not sharing the Gospel with a lost friend or co-worker because they might not like us anymore? How can we keep silent about our faith with our family because it might cause tension at the annual holiday get-together? Obviously, we should never be rude, insensitive or obnoxious (which sometimes Christians are), but isn’t it time for us, as Christians in America, to stop playing it safe? Jesus didn’t play it “safe” when He came to earth. The Gospel is risky and revolutionary. It should turn your life upside down. It’s also the only hope for a decaying world. True Christianity is anything but safe!

Can we help you spiritually? Can we help you know Jesus better? Please check out more resources on our church's web page, Gracechurchwi.org. Or, call us at 262.763.3021. If you'd like to know more about how Jesus can change your life, I'd love to mail you a copy of how Jesus changed my life in "My Story." E-mail me at Carson@gracechurchwi.org to request a free copy. Please include your mailing address.
Posted by Scott Carson at 5:14 PM