The Irrational Hypocrisy of Abortion 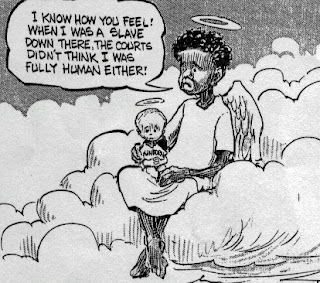 "The abortion industry kills as many Black people every four days

as the Klan killed in 150 years.” John Piper

If you think about it, this counter-cultural reality that we need to even have a Sanctity of Life Sunday is very sad. It shows the irrationality of the dark world we live in that we must point out that mothers shouldn’t kill their children and that fathers shouldn’t be complicit in that decision. No human life is worthless or disposable, regardless of skin color, age, disability, economic status, etc. The very fact that these things must be proclaimed is a reminder of the moral horror of this present darkness.
I find that the abortion argument is based on an irrational hypocrisy. It’s same tired rational that a woman has the right to choose what she does with her own body. BUT she doesn’t have that right to choose in so many other areas. Abortion only gives her the right over her reproductive organs, even that’s legally limited. While it’s legal for a woman to have a baby scraped from her uterus, it’s illegal for her to sell her uterus or most other body parts. It’s illegal for her to cut off her own finger or gouge out her own eye. She can’t legally take her own life. But somehow it’s supposed to be rational for her to take the life of another because it’s “her body.”
Another irrational hypocrisy is that abortion needs to be legal because of all of the cases of rape, incest or where the mother’s life would be in jeopardy. If you add all of those “potential” cases together, they make up less than 5% of all abortions that take place. Politically (I didn’t say ethically or morally), if we who are pro-life compromised with a lost world on those potentialities, 95% of all abortions would become illegal.
Abortion is an irrational hypocrisy in that the father has no rights. The father has no legal right to intervene in whether his child lives or dies. Some will suggest he doesn’t have to carry a baby for nine months. No, but if the mother chooses to have the baby, legally, he must financially carry that child for the next 18 years with 17% of his income. He has no rights so that he can protect his child before birth, but has huge responsibilities if the mother chooses to have the baby. What about his rights?
Many rightly decry gun violence, suggesting the problem is easy access to guns in our culture. It’s irrational hypocrisy that many of these same individuals are not only pro-abortion but support the incomprehensible atrocity of partial birth abortion. With such a twisted worldview being purported and such a low value of children, is it any surprise child abuse has risen some 500% since abortion was legalized? If one does not value a child before they are born, why would they value them after they are born?
Partial birth abortion is so irrational that a baby can be killed even in the third trimester. Yet, if the mother has a vaginal birth and abandons or kills the child after its birth, she can be charged as a criminal. With the new discoveries in medical science, premature babies born as early as 22 weeks survive. Great emergency efforts are taken to save a preemie, yet a baby can still be aborted up to nearly full term but somehow it’s still a “fetus.”
It’s illegal for a minor to have her ears or anything else pierced without parental permission. Most schools won’t give a child even an aspirin. But in many states a pregnant teen can be taken by school personnel for an abortion without parental consent. It’s an irrational hypocrisy!
If some of the supporters of the Affordable Care Act had had their way, personal freedom would have trumped religious freedom. The original federal rules required companies, who because of their conscience or religious beliefs were opposed to abortion, to still fund it in their company insurance plans. Until wiser minds in the courts stepped in, ObamaCare mandated insurance coverage for abortion inducing drugs even on Catholic nuns – specifically, the Little Sisters of the Poor in blatant disregard that religious freedom is a Constitutional right. It’s an irrational hypocrisy that uses the Constitution like a baseball bat when it fits one’s worldview, yet ignore the 1st amendment protecting those with religious convictions. It becomes more inane, in that nuns take a vow of chastity yet would be forced to pay for a service their religious vows would never make tenable.
There are nearly 700,000 abortions in the United States annually. The politically correct reasoning is abortion is needed so that there will not be all of these unwanted children. Yet, 58,000 children are adopted each year, some 6,500 of them are foreign children. Though there are no national statistics on how many people are waiting to adopt, experts estimate it’s somewhere between one and two million couples. It’s an irrational hypocrisy that refuses to add up the basic numbers. If every aborted baby was instead allowed to live and be adopted, there still would not be enough children for those desperately desiring to adopt. And currently, babies are adopted in spite of extremely high costs, onerous laws and immature mothers who change their mind at the last moment about the adoption.
Abortion is not just evil, it’s irrational. Let’s stop pretending it’s necessary. It’s the ultimate selfishness, taking the life of another so one’s own life is not “complicated.” Christians must be the greatest advocates of life. We must advocate and teach our children biblical morality so abortion is never a temptation. We must support adoption and foster care programs.
In Christian love we must assist young mothers emotionally and financially who choose life and decide to have that child. We must have Jesus’ view of the wonderful value of children and teach our own children a biblical worldview of the sanctity of God’s precious gift of human life.

Can we help you spiritually? Can we help you know Jesus better? Please check out more resources on our church's web page, Gracechurchwi.org. Or, call us at 262.763.3021. If you'd like to know more about how Jesus can change your life, I'd love to mail you a copy of how Jesus changed my life in "My Story." E-mail me at Carson@gracechurchwi.org to request a free copy. Please include your mailing address.
Posted by Scott Carson at 8:36 AM